My Story in Midwestern Gothic

When I first saw the literary journal Midwestern Gothic at the AWP Book Fair, I knew I wanted my work to appear there. It felt like destiny, since I am from Iowa and all.  A rejection or two later (but who’s counting?), I’m pleased to report that I have a short story in the new issue:  “The Devil’s Daughter.”

I read this piece at the last Converse low-res MFA residency period, and—if anyone is keeping track—it’s part of my current work-in-progress, the official title of which is “my 200-page mess.”

Here’s the opening of my story, which takes place in 1981:

My roommate arrived first, staking her claim. Probably someone told her do it that way, her cum laude mother or Ivy League dad or an older sibling or cousin in college. I had no one telling me anything. So I didn’t know I should take the overnight bus to Chicago from Iowa instead of the one arriving late in the afternoon, meaning that I unlocked the dorm room door to see a fluffy comforter with bright poppies already arranged on the bed along the wall with the window, cracked open and grabbing the only breeze. Several dozen white plastic hangers holding blazers and skirts and blouses filled the closet with the door where F.U. wasn’t gouged into the wood.
I rubbed my fingers along the grooves of those letters, imagining a deeply angry freshman girl digging a nail file from the clutter of her purse, carving those letters into the wood while at the library her roommate wrote a smart paper about Jane Austen or blew her boyfriend in a car parked by the lake or spray-painted acorns lustrous gold for table centerpieces at a sorority mother-daughter tea. I hoped my roommate wouldn’t be that angry girl.
Also, I hoped I wouldn’t be....

If you’d like a copy of the issue, you can purchase it here.  (It’s available on e-book, too.)

More information about the journal:  http://midwestgothic.com/. 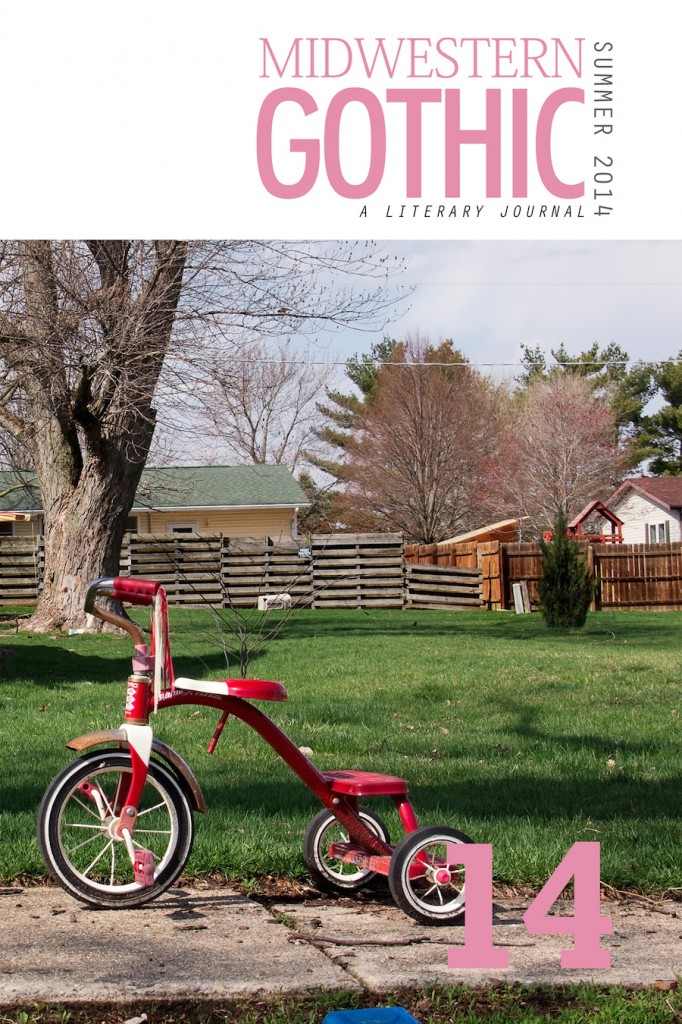