As you may recall, I’m in the midst of a writing residency at the fabulous Hambidge Center, in the mountains of north Georgia….  Here’s the latest news:

After six hours, two glasses of wine, and about 1000 scraps of paper and index cards, I may have come upon a plan for my novel-in-progress.  Or not.  I guess we’ll see in the morning.

If this plan works out, I’ll chalk it up to the power of stepping away, as I spent the morning and early afternoon doing some sightseeing around the area.  My first stop ended up being the liquor store because I had gotten lost and I needed to check out any local artisan booze, and I was pleased to pick up some rye from Georgia for Steve (so easy to shop for a man who is interested in craft cocktails!).  After getting directions from the nice guy at the cash register—who also told me a gossipy story about a local man who was once a millionaire who lost all his money—I ended up at my destination, the Foxfire Museum & Heritage Center.

Foxfire started as a magazine written by high school students in the 1960s that explored and celebrated mountain culture; the premise of the project involved students interviewing relatives and elders about their experiences and the old ways.  The cabin I’m staying in at Hambidge is where the founder actually lived and worked for many years.  The museum is a collection of cabins and structures from the 1800s that give a taste of mountain life.  I will say that while it’s disappointing not to be allowed to go inside everything or have interpreters along the way, the experience was nevertheless quite fascinating.  I’ve been to lots of these sorts of things—Williamsburg, Plimoth Plantation—but I’d never seen this part of America’s history on vivid display.  I learned how to notch the corners of my logs so that water will fall down, not in; I had never heard of the dog-trot as an architectural detail to help keep structures cooler; there was a wagon from the 1700s that was used in the Trail of Tears; and I saw a hog scald, which, as you can imagine, is where a butchered hog is dipped into boiling water to remove the hair.  No one said mountain life was easy!  The site is laid out nicely on Black Mountain, a patch of land that was purchased from royalties from the Foxfire books.  I wish that some of the interviews were online or on CD, but alas.  As it was, listening to the two excerpts available was eye-opening:  one woman said that until she got married at age 38, she had spent only 5 cents on candy in her life.  I’ll also note that the kids who interviewed these folks got to practice a great deal of patience as there was a fair amount of rambling, which was charming…but, well, to this big-city-lady, still rambling!  But the joy was that you never knew when that fabulous detail would show up.  (Of course I bought a Foxfire book and some recipe postcards.)

Then I poked around the cute little downtown of Clayton, Georgia, with antique shops, restaurants, and Prater’s Main Street Books, with a friendly cat and a nice selection of books, including some regional authors.  Do you think I escaped without buying anything…oh, haha.  I ended up with the unusual combination of Ecology of a Cracker Childhood by Janisse Ray and Driving with the Devil: Southern Moonshine, Detroit Wheels, and the Birth of NASCAR by Neal Thompson.

In other news, I have a pet spider living on my deck that I’ve become attached to.  It’s not as good as a cat, but it’s almost as big as a cat…it’s in the orb weaver family and is about the size of a giant jawbreaker.  I leave my desk light on as long as possible to attract moths that then may veer into the (giant) web...truly, on some nights it’s about three feet tall!  I’m part of an ecosystem!  This is a picture from the internet that looks a lot like my spider: 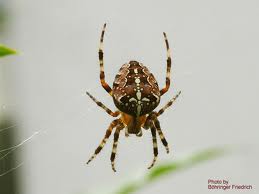 And I’ve been doing a little bit of hiking on the trails around here.  I won’t call myself a “good” hiker, but I’m certainly interested and remained stunned at how thrilling it is to look up, over, and around and see only trees and vines.  I know there are no bears because I try to make as much noise as possible so they skedaddle. And the mushrooms are gorgeous, from vibrant orange, to whiter-than-white, to bright yellow, to nut-brown.

I’ve been reading Flannery O’Connor’s short stories, and I suspect this has been said, but MY GOD, they’re good!  Word choices, dark humor, capturing a character in a sentence…oh, my.  I’m sure someone could write a dissertation on the phrases she uses for characters’ eyes alone. (For example: "deep-set fox-colored eyes" in "Greenleaf"; "her eyes were gray and sharp like the points of two icepicks" in "Parker's Back"). I'm not sure why this book isn't on my "favorite books" bookshelf--? It will be when I get back home.

The chef made some North Carolina trout on Friday that was among the best fish I’ve ever had—and the best leftovers the next day.  I really miss her on weekends/Monday when we’re left to fend for ourselves!  Today I tried Zaxby’s, a Georgia fast food chicken chain that I had been curious about, but alas, I was unimpressed…it’s no Biscuitville!  Also notable is that I drank a (small) glass of true, real, authentic, illegal moonshine…and that glass was small for a reason!  Whew…tough stuff!  Enough of that, and hog scald day would seem like a picnic!

Time to wind down and read as the rain drums against my cozy cabin roof and the canopy of trees…and keep my fingers crossed that the work of today holds up in the light of tomorrow.