Do It Yourself: Word Clouds

Writer Dan Ryan passes along the following site where you can create a “word cloud” of your novel or short story:

You may have seen word clouds in the newspaper or magazines, often associated with a political speech (i.e. how many times Barack Obama said “change”; how many times Sarah Palin said “you betcha”); the more often a word appears, the larger it is in the cloud.

I’m saving this bit of fun for when I return back home (“how did you spend your residency at VCCA?” “making word clouds of my oeuvre”), but it seems as though a word cloud could be useful—do I really over-use the word “sigh” as much as I think I do? What other verbal tics will be revealed?

Here are the word clouds Dan created for The Great Gatsby and Moby Dick...no surprise which words appear the most there, huh? 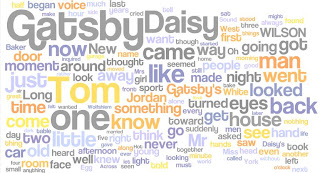