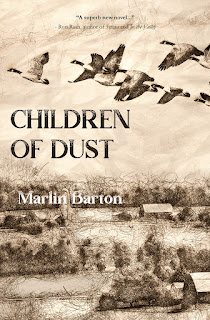 In 1880s Alabama, Melinda Anderson gives birth to her tenth child who does not live a full day and dies under somewhat questionable circumstances. Melinda thinks her husband’s mixed-race mistress, Elizabeth, killed the child, and Rafe, the husband, thinks Melinda killed him. A century later, in short chapters interspersed throughout the novel, descendants, one white, one Black, who are also cousins, attempt to understand not only what happened but how to relate to one another.

The husband and wife in the novel are based loosely on my great-great grandparents. I know a good deal about my great-great grandfather but very little about my great-great grandmother. So I most enjoyed creating Melinda because as I wrote the chapters that are in her point of view, I felt as if I were getting to know my ancestor in a way I’d never been able to. It may sound odd, but I feel I know her now and know how she struggled and survived what had to have been a difficult life. She is so much more real to me, despite the fact that I was creating a fictional character.

The most difficult character to write was Rafe because he is such a hard man, and though I would not call him evil, he has a capacity for evil that manifests itself in some quite horrible ways. What made the writing so difficult was that he is also a point of view character. So I had to enter into his mind and develop him as a fully three-dimensional character and convey his rationale behind what are really some evil acts. Writing from his point of view was often unpleasant, but I did it for two reasons. First, I want the reader to feel in a complete and visceral way what Melinda is up against. And second, I think examining evil from the inside looking out instead of always from the outside looking in is a valid undertaking that can make for a more complex character. I do want to make clear here that Rafe is no psychopath. I’m not interested in writing about a psychopath because they are one-dimensional, by definition, it seems to me, incapable of empathy and what we think of as normal human emotions.

Ah, where to begin? I decided at the outset that I would query up to fifty literary agents, which I ended up doing without getting an offer of representation. Some of them, after reading my query and maybe a first chapter, let me know they weren’t interested. Others asked to read more of the novel or maybe all of it, and some of them responded and some didn’t. I also, through somewhat unusual circumstances, managed to have two editors at major publishing houses read the novel early on. One seemed to genuinely like the book but said he didn’t feel he had enough clout at his press to push the book through because of its difficult subject matter, which I took to mean race. The other editor wrote a detailed critique, and though I didn’t agree with much of what she wrote, there were points I took to heart when I wrote another draft. So she did help make it a stronger book. After I felt I’d exhausted possibilities in New York, I began querying and submitting to smaller, independent publishers. After about eight rejections, Regal House Publishing in Raleigh, NC accepted the novel in January of 2020. (I thought, Wow, 2020 is going to be a great year! Boy was I wrong about that.)

I’d found Regal House when I carefully scouted out the book fair at the AWP conference in Portland. And here’s something I didn’t notice about them even after looking at their website—my wife Rhonda had to point it out to me: the press is owned and staffed completely by women, which I thought was pretty cool.

I sometimes have students tell me they’re stuck in the middle of a story and don’t know how to move the story forward. My advice, which I’ve used myself and found it works, is to think about the situation the character is in and to think about what the character wants, which is always a central question. I tell the student to then think about what a person (not their character so much but a real person) might do in that situation. In other words, what actions might a person perform in order to obtain what he or she wants. I tell the student to list all the possibilities and after looking at the list, choose the one that feels most unexpected but still right for the character. I did this with Melinda in my novel. After she loses her child, I wasn’t sure what she might do. One of the choices on my list for her was going to see a conjure woman. And that’s the one I picked. Without the list, I wouldn’t have made that unusual choice.

When I first began writing the novel, I thought I knew exactly how the child died and exactly who was guilty of the death, which I would reveal late in the novel. What surprised me most is that I slowly found I didn’t know exactly how the child died or if anyone was guilty of its death. What became much more interesting to me was who the other characters thought was guilty and what that revealed about them. Even the mother of Rafe’s mistress, whose name is Annie Mae (and who is the midwife who delivered the child), believes strongly that her daughter Elizabeth is guilty, which made for an interesting and conflict-filled dynamic between the two characters.

I’d had the idea for the novel for some time and had been doing research on the period, but I hadn’t begun writing yet and hadn’t even thought about a title. Then one Sunday in church we were all singing (well, I was at least mouthing the words because I can’t quite bring myself to sing) the hymn “O Worship the King,” and I read the phrase “children of dust” in the lyric and knew immediately that was my title. Melinda, I’d already decided, had lost four earlier children in either infancy or at very young ages, which of course was common then. So the phrase from the hymn seemed right. I actually wrote an opening line for the novel right then and there on the church program, though it later went by the wayside.

I’m not really a foodie, so I can’t say food plays any kind of central role in the book, but I do describe a few meals that Annie Mae prepares (in addition to being a midwife, she is also the cook and live-in maid for Melinda and Rafe’s family). One staple of their meals is cracklin’ bread, which is cornbread cooked with cracklings inside the cornmeal. Cracklings, for those who might not know, are fried pork rinds rubbed with salt, and they crackle when you bite into them. (And no, you won’t find cracklings at the health food store.) By the way, I have sometimes had “cornbread,” usually outside of the South, that has the texture and sweetness of poundcake. Cornbread should never look or taste like a piece of cake. My grandmother sure knew how to cook it. What I’d give to have some of her cracklin’ bread right now.

READ MORE ABOUT THIS AUTHOR: https://marlinbarton.com/

ORDER THIS BOOK FOR YOUR OWN TBR STACK: https://www.regalhousepublishing.com/product/children-of-dust/